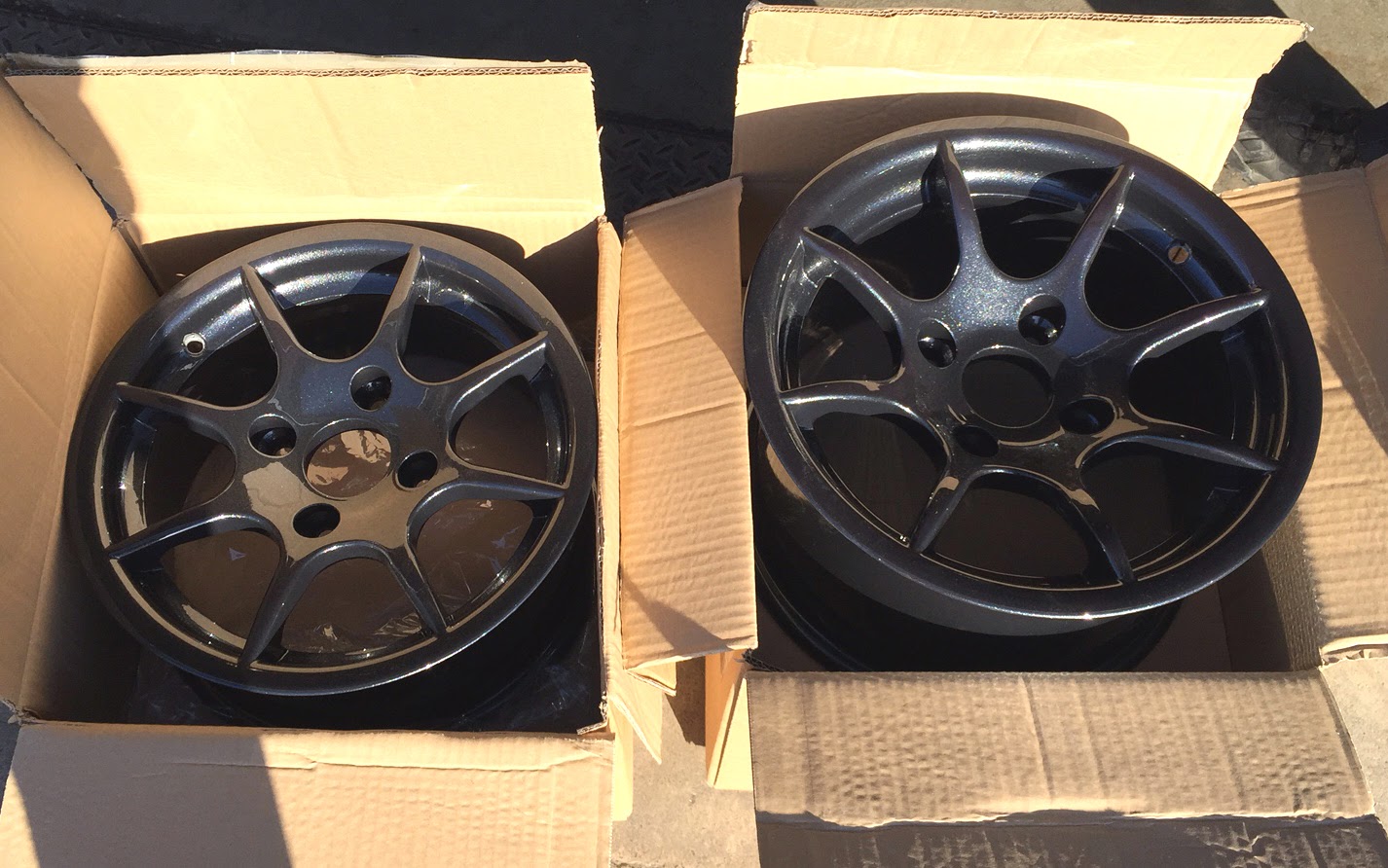 On the way back from Mint Alloys I dropped the wheels off to Dave at Daytona Coachworx who will be painting the wheel rim over the next three or four weeks.  We discussed where the rim should be masked to and how large the orange rim will be.  After looking at some pictures online we decided to go right around the curved section of the rim and a sample mask was laid onto the wheel.
And the final piece of the puzzle was the get a RAL colour to match the decals on the car.  I didn't have a RAL chart so ordered one off eBay.  It arrived this morning and I offered up the RAL chart to the decals on the bonnet and it looks like RAL 2004 is the colour the rims will be painted in.
So the next stage will be to let Dave do his work and then collect the wheels from him in three to four weeks.  Then get the AVON ZZR's fitted, paint the tyre wall and this project will be finished.﻿﻿﻿﻿
Posted by Daniel French at Thursday, February 19, 2015 2 comments:

Following on from my previous post I seem to have accumulated a reasonable collection of rubber...
﻿ A brand new set of Avon ZZR's that I'm dying to try out, and some new rear CR500's as having covered around 2,600 miles my existing rears are very much on their last few microns of tread... I'm not too sure having this many tyres laying around is a normal behaviour, but I'm guessing it is with Caterham ownership... and with any luck by the end of the year a large proportion of this rubber (if not all of it) will be heavily embedded in some tarmac either in the UK, France or maybe even further afield!

The poll results (as they stand right now)
The results to the poll for what colour wheel option I should go for are as follows:-
﻿ Gloss orange is the winner with 49 votes, Matte Black with Orange rim came in second with 45 votes and the standard anthracite was the least favourite option with 27 votes.

Having considered the results (and thanks for all your votes by the way) I've also taken into account the fact that a couple of my mates have pumped in some fictitious votes to get the gloss orange to win... I'm declaring my original favourite the Matte Black with Orange rim the overall winner.

Organising the wheel repainting
So onto getting the wheels painted up.  I ended up ordering a set of front wheels from Demon Tweeks a couple of days ago, as the second hand set I was going to get from Steff (on Blatchat) may not have been up to standard and Caterham didn't have any stock.  Nevertheless, the front wheels arrived yesterday.

I used a local company (Mint Alloys) to refurbish some diamond cut alloys I owned many years ago and they done a really good job... So I decided to contact them to see if they could repaint these new wheels and paint the orange rim.  They said they weren't geared up for getting a good finish on the rim, but would be happy to assist with the new colour I was looking to achieve.  I'm not entirely sure the Matte black will be as good as I initially hoped, so have decided on a very dark grey instead... I daren't mention the name of the colour code of the grey (for reasons I'll make clear in the future).. but decided to make a final mock up last night of what I'm trying to achieve to ensure 100% before I committed - so here is what it 'should' look like:-
﻿ I can't quite get the right orange on the photoshop image, but it'll be the same as the orange in the stripe on the bodywork.  I've also whitened the AVON wording on the tyrewalls too.

Knowing that mint alloys won't be painting the rims, I contacted Dave at Daytona Coachworx - the chap that finished off the carbon headlights (that I've still to fit) and he said he'd happily paint the wheel rims for me provided I gave him the colour code that I wanted.

So earlier today I dropped the wheels off at mint alloys and they said they should be finished in a couple of days.  Below is a picture of the wheels with the new colour swatch offered up against the old (which are new) 'factory anthracite' coloured wheels - it doesn't look much of a difference in the picture, but they'll be much darker - close to black once they're finished.
﻿ And when finished they should look something like this:-﻿
I'm already looking forward to getting them back, seeing what they look like, then getting them straight over to Dave at Daytona Coachworx so he can get busy painting the rims.
﻿
Posted by Daniel French at Thursday, February 12, 2015 No comments: