Ian from Caterham arrived around midday on Monday to collect the car, after he'd dropped off 'someone' else's kit!  Hopefully this will be the final collection for my issue, as I'd really like to have the car back and be leak free once and for all!
Simon Lambert has come back to me today to say that Mick Atree and James have been working on my car already and their eagle eyes have been hard at work - which is very reassuring to hear.

They found an obvious issue straight away... Apparently the seal that CC Midlands had sourced was not an OE Ford part, now this would be normal for them to do with a service item as it's something they don't hold stock of and would naturally have been given the assurance by their supplier that it was the right part to use... and now comes the big however... Once the removed seal was compared with the genuine Ford part it proved quite different.

So the seal has been changed to a genuine Ford seal, the prop shaft has been balanced and according to Simon the static running is also proving positive too!  Happy days...  I would sign off there, but...

...Mick and James have noticed the diff is leaking! So that's their next job... Now I can sign off!  Will post with more updates as and when I get them...

The overall feeling is we're getting there, so I'm happy!

What Shall I do Poll Results and 'THE decision'

Below are the poll results... and this is where we're at, results (based on todays date) are as follows:- 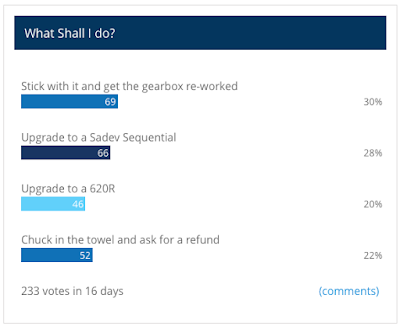 There have been lots of comments of (as always) varied opinions, a few emails and so on, but... and thankfully the majority of the voters went with what I'd already 'pre-chosen' to go with.  I'll go into a little more detail below about my reasoning.


Caterham will collect the car on the 23rd November, and take it back to the factory in Dartford.  They will give it a full inspection, get the gearbox out, re-work it (or replace if deemed necessary) and seeing as I don't have plans to use the car over the next few months, they can take their time....

...Having said that... I've had my eye on a set of carbon interior panels that from Westermann Motorsport which I'd love to get fitted during my time off over Christmas.......  Hmmm, and I might get my 'road wheels' repainted... Anyway.............


I'd like to say a big thanks to Simon Lambert for coming back to me with a lot of answers to my questions, and helping to (hopefully) get the show back on the road...

I'll post again when the car is collected next week - watch this space...
Posted by Daniel French at Saturday, November 14, 2015 2 comments: