Round Four of the 2019 Motul Caterham 270R Championship
Was held at Snetterton Circuit near Norwich, Norfolk...  I'm still the current lap record holder of this track in the Caterham Academy, and although I consider this not to be a technical track, and as such not one of my favourites, I seem to usually have good pace here, and as such was feeling confident for the weekend.

Thursday testing went well, tried a few different setups, harder, softer, higher, lower and ended up settling on my 'baseline' as the car felt good as it was, and at least I'd tried the other setups to know they definitely didn't work!

Thursday night is usually beers with the lads night, and we did just that.

Friday morning, the weather was dry, sun shining and I was in a great mood, looking forward to the day of testing... Until....... I managed to drop my Caterham onto my left index finger (the finger was on top of the axle stand) and crushed the finger!

I went straight to the circuit medical centre and Sam from Caterham took me to the A&E of Norwich and Norfolk hospital.  The finger got x-rayed, and it was confirmed I'd badly broken the intermediary phalange of my left index finger.
The doctors wanted to operate on the day, but that would've left me possibly in a cast / structure that I couldn't race with, so in true 'racing driver' fashion, I delayed the operation so I could at least try to race!


Qualifying
A couple of friends I know suggested to move the steering wheel further towards me, so I wouldn't stub my broken finger on the dash.  This was a great idea, but not my ideal driving position!  I fully strapped y finger up for qualifying, but it wouldn't fit in the glove, so I had to remove most of the strapping, and brave it!
Every gear change hurt, and particularly the slower hairpin corners hurt very much too, but I managed to slightly adjust my gear shifts and also how I rolled the car into the corners, and managed to qualify P8 on the grid, which all things considered was very good!

Race One
Lining up on the grid in P8 felt a touch 'unusual' as this was my worst qualifying grid position since I started racing Caterhams... 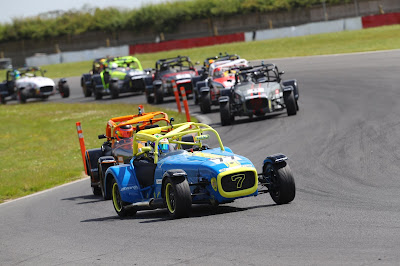 I got a reasonable start, and tried to make my way up the field... Miraculously by the end of lap one I was nearly in the lead!  The full onboard race video is below:-

Unbelievably, I only went and won the race!  The narrowest win of my 'racing career' - by only 0.006 of a second.  James Murphy and Matt Sheppard both raced really well, but this is by far my greatest victory of all time.

Here is a link to the official Caterham Hayfisher Media TV Coverage:-

I will never forget the feeling of pure unfiltered joy, having achieved what was considered by many; impossible.  It just goes to show if you put your mind to it, almost anything is possible with the right attitude and desire.
The podium pic:-
The top eight drivers making fun of my fortune and misfortune!

After race one finished there was a paddock party (provided by Caterham), which was really good... Great evening, warm weather, having just won the race, a few beers, food and banter - brilliant stuff.

Race Two
The finishing position of race one decides your race two grid position, so I was on pole position with James Murphy P2.
I got an OK start, James Murphy got a better start, so I was down to P2 by the first corner... The race was a long battle of swapping places, tactical positioning, and defending and attacking at the right places so as not to make any mistakes - basically true, raw, fun racing!  Onboard race video below:-

I was in P1 onto the final straight, but got out-towed by Justin Heap to the finish line, which meant I finished P2 (by just 0.1 of a second).

The podium picture:-
Championship Points Table
Given that I was in A&E on the Friday morning of the race weekend, I was thinking of 'damage limitation' and top ten finishes at best, however I managed to score the most amount of points of any 270R driver this weekend - 58 out of maximum 60 (fastest laps aside), which means I've managed to claw back another three points from Justin Heap (current championship leader).

Round Five - Spa Francorchamps
I'm currently typing this blog post whilst waiting in hospital for my finger to be pinned back together.  It's been agreed with the surgeon that he'll give me hidden pins, which allows me to race in two weeks at Spa (with suitable protection) - which is fantastic news!  Fingers crossed ☺
Posted by Daniel French at Thursday, July 04, 2019