With a bit of a thick head in the morning, I decided it best to grab a coffee and bacon sarnie before I got to work.  So around lunch time I managed to pluck up the courage and get stuck in to removing the remaining three panels - or at least I thought I could manage that!
The next logical panel to remove was the rear bulkhead.  Some sixty odd rivets later I noticed there were three rivets tucked away in the corners near the wheel arches, and with no way of getting a drill in there, I made my new 'rivet removal' contraption.  This consisted of a flat head metal handled screw driver which had a pretty sharp head on it and a metal hammer.  I just lightly tapped off the rivet heads which was pretty easy with my lovely new tool!
After the rivets were removed, I moved the tunnel cover, only to see there were another three underneath that which also needed removal, but these were easy to drill out.﻿

With all the rivets from the rear bulkhead now removed, it was time to get the bulkhead out - easier said than done - at first...  It appears that Caterham used some silicone to bond the bulkhead panel (along with a fair few rivets) and perhaps to provide a bit of waterproofing too.  It seemed most logical to start at the bottom and gently using the claw of a claw hammer prised the bottom part of the bulkhead away from the lowered floors.﻿﻿﻿
Next was to get the top section out - and as the bulkhead is wider than the edges of the car some bending was required.  It was a bit of a fiddle, but both of the top edges of the bulkhead needed to be bent to get them out from the metal part around where the top of the rear suspension is bolted in.  After prising this out, it looked something like this:-﻿﻿
Now onto more 'panel bending'... With both bottom and top edges freed (see above pics) the panel needs to be slightly bent in the middle to allow room to get it out of the car - don't bend it so much that you put a crease in it, but just a little effort and a bit of a wiggle and it'll be free!﻿

So with three out of five panels removed, it was onto the final two, both of which I'd been dreading!  Picture below shows me looking like I'm having a good time, but this was very fiddly due to the lack of space and I was not enjoying this part of the experience whatsoever.
To be fair drilling out the first section before the crease (in the outer panel) was pretty easy, it's just when the space becomes limited is when things start to get tricky!  It didn't take me long to find there was a severe lack of space and light in the drivers foot well, so after having my torch roll around whilst I'm trying to drill our rivets practically in the dark whilst squashed into the tiny foot well, I found another use for the accelerator!
With light at a premium, and drilling access also at a premium - I found these four pesky rivets, along with the vertical ones towards the end of the tunnel the hardest work.  I had to tap the top off these using the screwdriver method mentioned above, then try and drill then out and then tap out the final pin through too - all whilst cramped in ridiculously contorted positions. 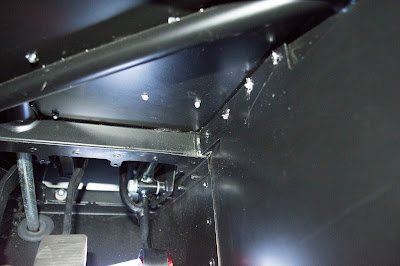 Having wrestled around for long enough I had a brain-wave which I wish I thought of earlier - remove the pedal box cover for some 'added light', and would you know it, yes this worked .  Picture below is to show the light coming through from pedal box, but the panel is also removed at this stage.
﻿ And the fourth panel is out!  Thank god!  Only one more to remove!
﻿
With the fourth panel out - I considered pushing myself and getting the final panel out, but I just couldn't face it, so decided it was time to calm down, and finish off for the day.  More 'fun' tomorrow.
Posted by Daniel French at Monday, January 18, 2016