With the collection due tomorrow I was in two minds about bonding the cycle wings myself, or taking the easy option and letting the factory do it next week in the PBC.  I'm glad to say I decided to do it myself using bighead cable tyrap fasteners and their (bigheads own) FS adhesive.

I struggled a little to get comprehensive information about fitting the cycle wings using the bighead fasteners, so  I took quite a lot of pictures, and have detailed what processes I went through so others may get some assistance if they are looking to do the same.

Firstly I fitted the IVA trim round the cycle wings, using little dots of super glue on the inside to hold the trim in place.  Then I tie wrapped the bighead fasteners in place using two on the upper and lower cycle wing mounts.  I used the 32mm square stainless steel cable tyrap which has the 16mm x 15mm inside width as these fitted pretty well around the cycle wing tubes.


Then the cycle wing got rested on the cycle wing mounts, and I measured from the top cycle wing stay to the front of the wing to a measurement of 80mm.  I think it's ok if it's between 75mm and 85mm so I decided to go in the middle of that range.
Then I masked the wing and the cycle wing stay and marked the location to make it a little easier when it came to bonding them in place.
Once the wing location was marked I removed the wing and using a 60 grit sandpaper roughed up the inside surface of the wing and the upper surface of the fasteners so that the FS adhesive would get a key to adhere to.  I also use a little bit of methylated spirits to wipe away any dust and residue on both surfaces.
Then using the Bighead Big Bond FS adhesive, (used sparingly according to the instructions) apply to the top of the fasteners.
I actually used a more bit adhesive around the edges of the fasteners after I took the picture above.  Then I placed the cycle wings onto the fasteners.  Once they were in place I double checked all the measurements and alignment with the front wheel and waited for the adhesive to cure.  The adhesive took around 15 minutes to cure, but I left it for an hour to ensure it had properly hardened.  A good tip would be to put some masking tape on the cycle wing stays so that any adhesive that leaks onto the tubes doesn't bond the whole lot together - which I found out when I was trying to remove the wing after the adhesive had hardened.  It really is strong very once it's hardened.
Next step was to remove the wings and mark out the holes for the indicator wiring and bolts to go through. They were pre-marked by Caterham, but I doubled checked their markings against how the indicators would line up using pictures on the internet, and it didn't seem they were marked out properly.  So I marked my own drilling points and made drilled the holes, opening up the middle hole with a Dremel.
Then I threaded the wires through and bolted the indicator into position.
Rather than earthing the indicator to the cycle wing stay by rubbing off some of the powder coat and bolting it into place; it seemed to be a better solution (to me) to extend the earth through the wing stay and earthing on the inside of the chassis.  So I extended the earth a couple of days ago and then today soldered the black and green cables together, heat shrinked them and pushed the wires into the cycle wing stay. 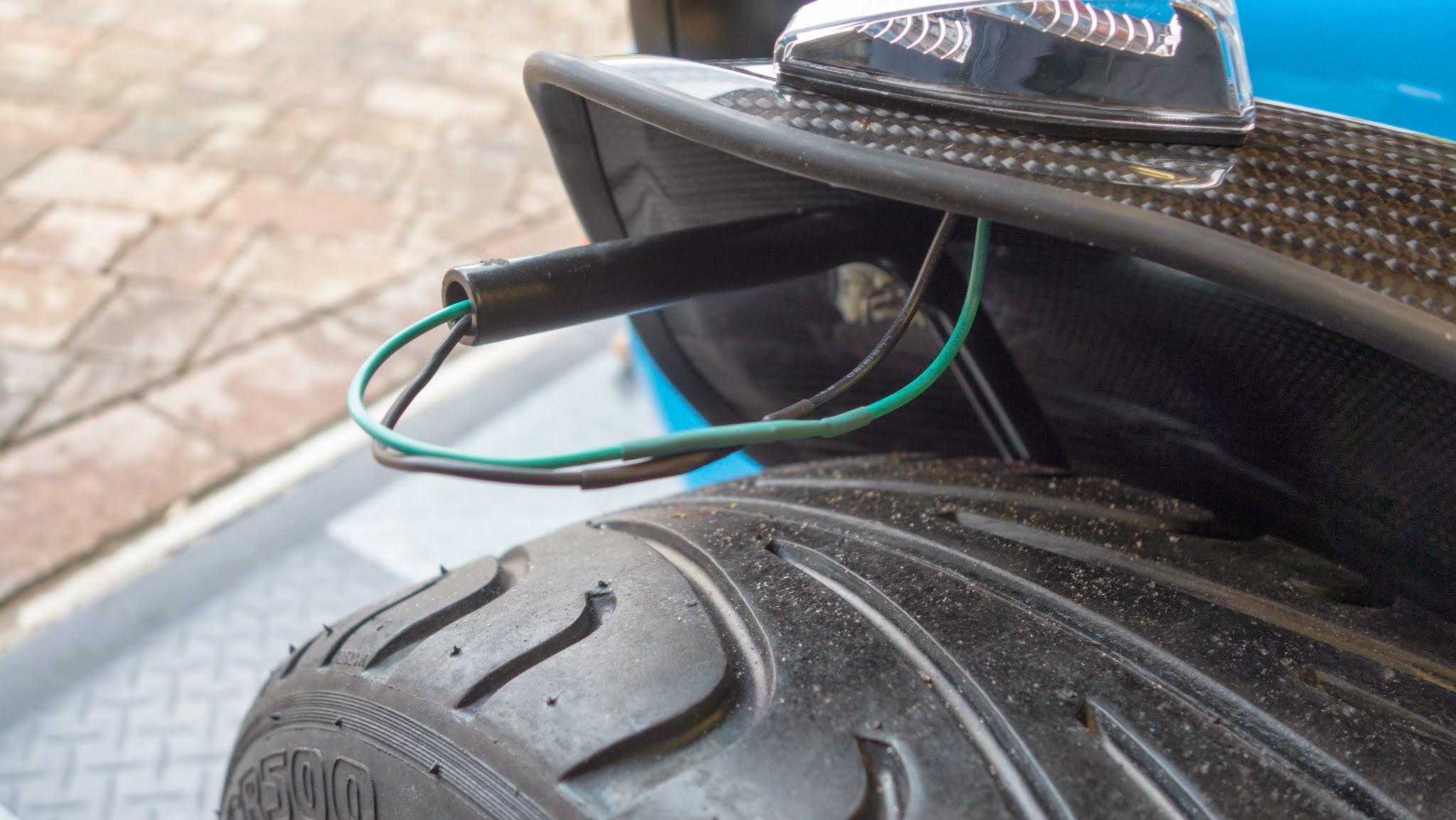 Then I located the fasteners onto the wing stay and tie wrapped them into place.  My reservations about using the bighead method was lateral movement wing due to the  cable tied fasteners, but once they were in place and cable tied using a wide cable tie, they really are fitted tightly.

I was initially happy with the aggressive angle of the indicator (see image below), but later decided a flatter angle looked better, so I just slightly opened up the mounting holes and adjusted the indicator accordingly.